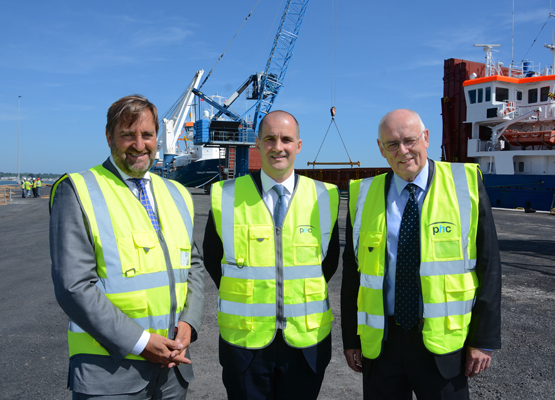 The Minister was welcomed by Jim Stewart, CEO of Poole Harbour Commissioners and Chairman of the Dorset LEP who took great pride in showing the minister around the newly expanded South Quay.

Jim Stewart enthused, “We are delighted that the Right Honourable Jake Berry is able to come along today and officially open South Quay.  This occasion celebrates this exciting and transformative project for the Port of Poole.  The Dorset LEP secured funding from the Government for road improvements for Poole and the port project formed an important part of the rationale for the road improvements.”

Continuing Jim added, “We are the newest cruise berth in the world and one of the biggest port developments seen on the South coast in recent years.  The creation of the new South Quay has created huge amounts of interest across the industry.  It’s brilliant news for Poole and Dorset and the new quay will enable us to get the name of Poole out there on a world platform.”

On cutting the ribbon the Minister for Local Growth, Jake Berry said: “The opening of South Quay represents a key milestone in the regeneration of the Port of Poole and a major economic boost for the local area. Welcoming cruise and cargo ships from across the world, this new quay bolsters the Port of Poole’s reputation as an international hub and a gateway to the south coast.”

Completion of the £10m South Quay project concludes Poole Harbour Commissioner’s ambitious 7-year expansion, said to be one of the biggest port developments seen on the South Coast in recent years.

South Quay is a 200m long x 40m wide deep-water quay that provides 9m in depth to accommodate vessels up to 220m in length. This has seen the Port’s capacity for conventional cargoes, yacht liners and special project cargo increase and will facilitate the ever-increasing interest from cruise ships wishing to visit Poole and the surrounding area. The development has enabled the port to accommodate bigger ships, carrying over 1,000 passengers.

South Quay has been operational for cargoes and yacht transfers since the beginning of the year, but the completion of the surfacing work allowed Poole to welcome its first Cruise Ship of the season in the first week of May; The Corinthian, operated by Grand Circle Line Cruises.